You are here: Home / The Dumpster Diver 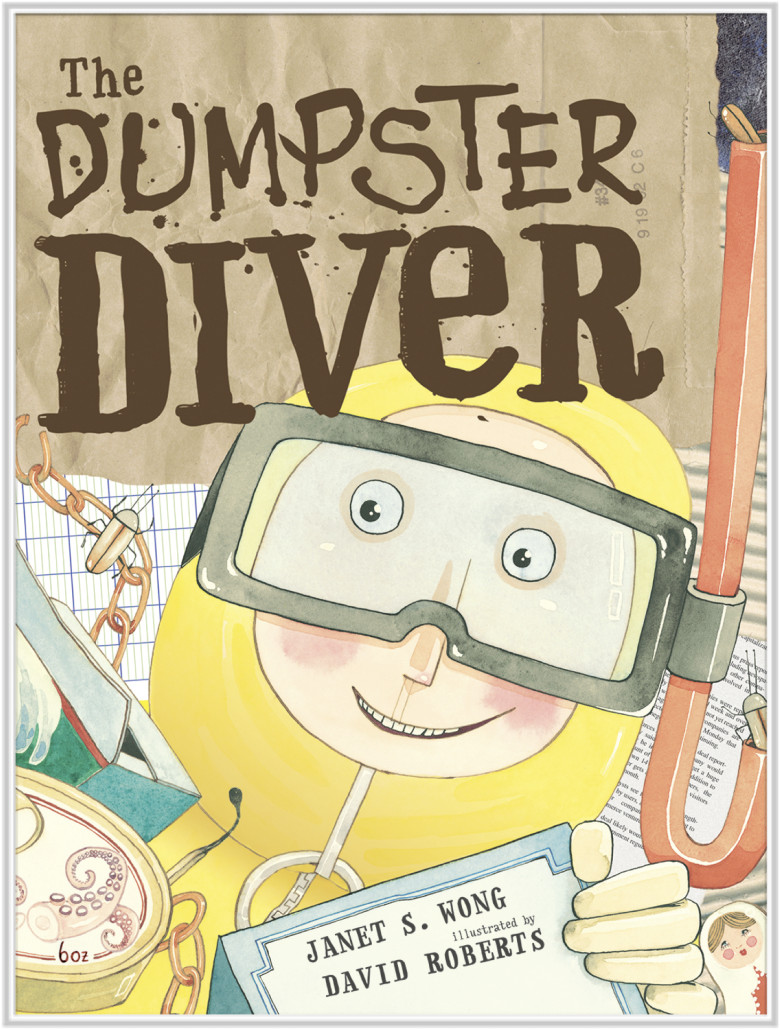 Why did I write The Dumpster Diver?

I am drowning in junk. My garage and closets are full of just-slightly-broken furniture, outdated electronics, parts and pieces of my son’s old toys, and strange doodads that people thought would make a funny gift. Every year I take a big load of my best junk to Goodwill. I leave the slightly-broken stuff at home. I could throw the broken stuff away, but that would seem too wasteful. And so the piles in my garage and closets continue to grow.

Several years ago I met Kerry Wade, an artist who makes furniture out of old things. I loved the chair he crafted out of broken wooden skis. When I asked him how he got the idea to make it, he answered, “Oh, I’m just a Dumpster Diver!” The idea of this intrigued me; I don’t want kids to start jumping into Dumpsters, though! In The Dumpster Diver, the kids decide (at the end of the book) that asking neighbors for old and unused stuff is much better than digging through trash.

The Dumpster Diver is a call-to-action to all of us to stop throwing good stuff away. I would be thrilled if my book started a trend: I’d like to see groups of children and adults get together to fix and build new things out of Useful Junk. This would be a good Earth Day project. Or something fun and unusual to do at birthday parties, or in the summer. A substitute for frenzied shopping at the mall—and good practice that might lead to becoming an inventor, engineer, or Mad Scientist!

My message to kids: Reduce-Reuse-Recycle! Have fun with your junk, while you make this world a better place!

Illustrator David Roberts
Published by Candlewick Books
ISBN 9780763623807
Available at Amazon and Indiebound
From School Library Journal
PreSchool-Grade 2—This urban trash-to-treasure tale will resonate with city dwellers and send suburbanites and kids in rural areas searching for similar adventures. A boy waits at his bedroom window for his adult neighbor Steve, a.k.a. “the dumpster diver,” to set things in motion. Five taps come on the boy’s window and two other young residents of the building also receive the signal to report to duty. The children are “Hose Handler #1,” “Hose Handler #2,” and “The Fauceteer.” Armies of insects are dislodged when Steve dives into the back-alley Dumpster and hauls out seemingly worthless junk, but worth is in the eyes of the beholder, and the three assistants share his reverence for discarded objects. Broken skis, blenders, and lamps can all be reincarnated, and half the fun is finding a tenant who will appreciate some newly fashioned object. Steve’s enthusiasm and creativity are so infectious that neither he nor his helpers are deterred by the building grouch, who thinks that the man should get a real job. The text aptly appears on torn scraps of paper or, in the case of the final words, a Band-Aid that Steve will need, having incurred a “work related” injury and convalescing in a homemade wheelchair! With his unmatched gloves and flippers, goggles, and hooded yellow slicker, Steve is a lovable comic figure. Roberts portrays him with a playful elasticity that perfectly matches Wong’s playful story.—Gloria Koster, West School, New Canaan, CT
Copyright © Reed Business Information, a division of Reed Elsevier Inc. All rights reserved.
From Booklist
*Starred Review* Riffling through rubbish isn’t an activity that most grown-ups wish to encourage. But seasoned writer Wong cleverly spins the topic for children, leaving the actual diving to a grown-up who is clearly known to everyone in the featured apartment complex: “Our neighbor Steve the Electrician dives for buried treasure right smack here in our backstreet alley.” The book’s African American narrator describes how Steve enlists a “Diving Team” of children to dream up wild ways to reuse his finds, such as a blender lava lamp or a zany contraption held together by “thirty-two screws and a roll of duct tape.” Essential to the book’s charm are Wong’s dry humor (rule number one of garbage immersion: “KEEP YOUR MOUTH SHUT”) and Roberts’ screwball watercolors, which capture the whimsy of the creations, the gross-out fun (cockroaches abound), and the breathless energy of all involved. The topsy-turvy artwork keeps things light, but adults will find plenty to talk about with children, from the value of creative conservation to safe modeling of the depicted activities (which include gathering junk from apartment tenants who may or may not be strangers). This will be popular anytime, but especially around Earth Day, when it will inject new possibility into enjoyment to reduce and recycle. Jennifer Mattson 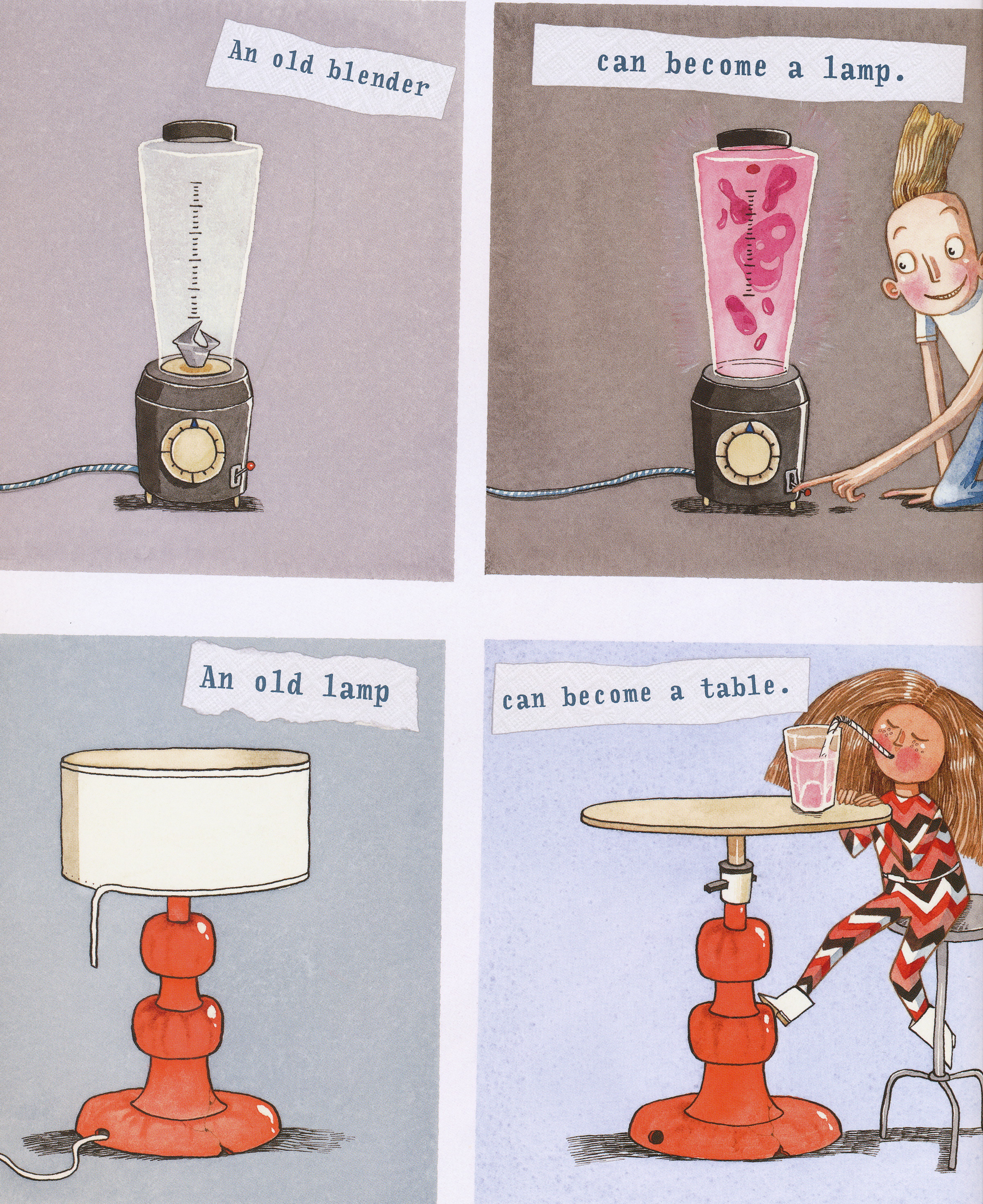